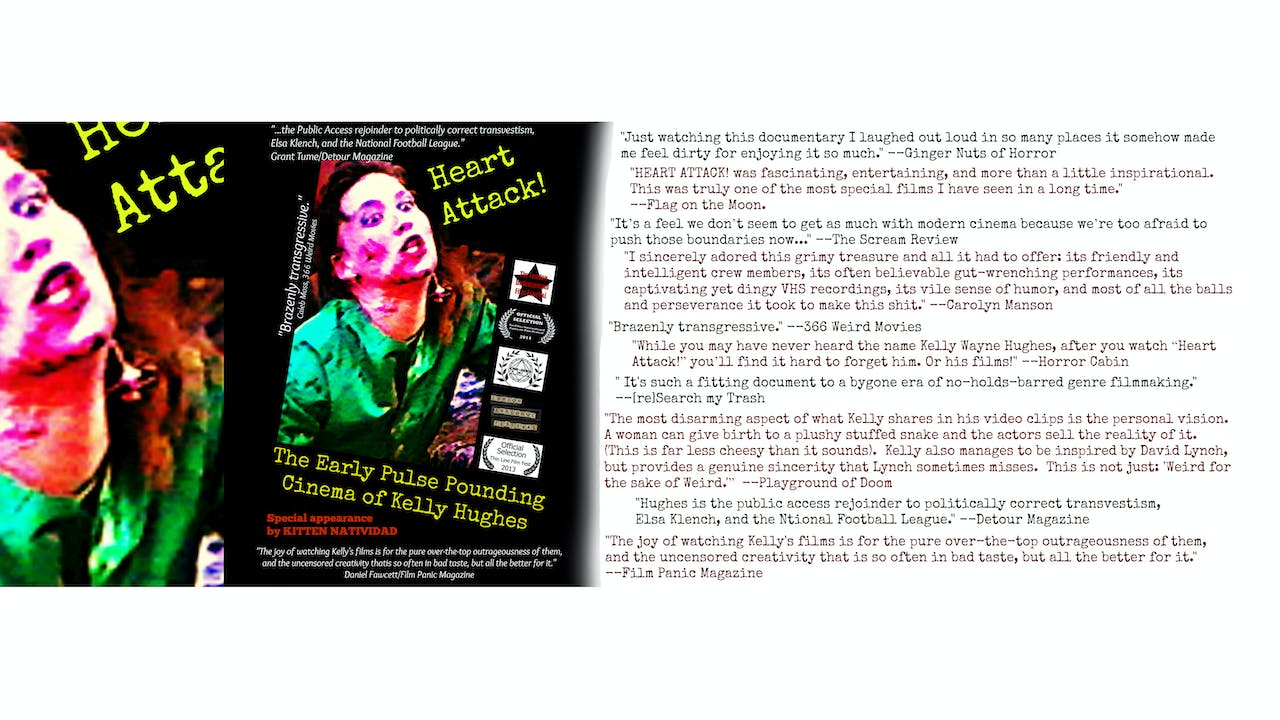 From 1991-1993, while Nirvana and Twin Peaks made the Pacific Northwest hip, Hughes quietly created an unprecedented body of work on Seattle's public access TV. His weekly series Heart Attack Theatre was the video equivalent of grunge rock.

Aiming for a classy Twilight Zone style suspense anthology, he ended up with a John Waters-esque shock-a-thon, shooting most of his footage in and around his apartment near the University of Washington.

In this documentary, Hughes interviews his actors to reveal a pre-YouTube era of do-it-yourself film-making. And showcases his native Seattle in all its trashy glory. Includes a cameo by Russ Meyer super vixen Kitten Natividad.

"Just watching this documentary I laughed out loud in so many places it somehow made me feel dirty for enjoying it so much."
--Ginger Nuts of Horror

"HEART ATTACK! was fascinating, entertaining, and more than a little inspirational. This was truly one of the most special films I have seen in a long time."
--Flag on the Moon.

"It’s a feel we don’t seem to get as much with modern cinema because we’re too afraid to push those boundaries now."
--The Scream Review

"I sincerely adored this grimy treasure and all it had to offer: its friendly and intelligent crew members, its often believable gut-wrenching performances, its captivating yet dingy VHS recordings, its vile sense of humor, and most of all the balls and perseverance it took to make this shit."
--Carolyn Manson

"While you may have never heard the name Kelly Wayne Hughes, after you watch “Heart Attack!” you’ll find it hard to forget him. Or his films!"
--Horror Cabin

" It's such a fitting document to a bygone era of no-holds-barred genre filmmaking."
--[re]Search my Trash

"The most disarming aspect of what Kelly shares in his video clips is the personal vision. A woman can give birth to a plushy stuffed snake and the actors sell the reality of it. (This is far less cheesy than it sounds). Kelly also manages to be inspired by David Lynch, but provides a genuine sincerity that Lynch sometimes misses. This is not just: 'Weird for the sake of Weird.'”
--Playground of Doom

"The joy of watching Kelly's films is for the pure over-the-top outrageousness of them, and the uncensored creativity that is so often in bad taste, but all the better for it."
--Film Panic Magazine